We took the long journey down to Brighton for the world’s most popular search conference BrightonSEO. It’s a truly amazing event where 4000 people from 40 different countries attended and here are our own key takeaways.

First of all, we attended auditorium 2 where we saw Mike King talk about some processes and software he has been using to ensure that development changes that could cause issues with SEO are negated.

The main theme of this talk was that by introducing SEO into test driven deployment you could catch issues before they are deployed. For instance, a unit test could be developed to ensure that certain pages within your site do not have a meta noindex tag present when launching. If the new code did feature this element it would result in a test failure.

Second to the stage was Barry Adams who introduced himself by warning the audience that his talk will contain swearing. And highlighting that developers sometimes call him names...

He gave some excellent pointers on some problems he had encountered when development changes had led to loss of real estate in the SERPs.

iframes May Indicate Body of Page Has Begun to Search Engines

Secondly, he joked about nobody gets hreflang tags right the first time and showed another example of where JavaScript that was inserting an iframe above the hreflang tags which again caused an issue as he discovered that maybe because an iframe is always expected to be in the body of the page, Google assumed the head had ended and hreflang tags don’t work in the body.

He championed speed claiming that not many people would deem their websites to be fast. Particularly large-scale sites who contain a number of scripts but he emphasised that speed was key in simple terms by stating the faster the website the more pages that get crawled.

Another bit tip he gave was that ‘redirects bleed link value’ and by fixing these it can help improve traffic.

He summarised with a few key points:

Last in the session was JP Sherman who starting out by stating some eye-opening stats regarding site search:

We personally loved the idea of basically turning your own site search into a search engine. Here are the highlights:

He showed examples where autosuggest helped increase click through on site from 42% to 57% and resulted in a conversion rate increase from 3.9% to 5.1%.

Where a user is searching from can influence the intent behind their search and one example he gave is a search of ‘bike tyres’. If a user was searching from Santa Monica the likelihood is that they are looking for road bike tyres whereas a user from Colorado Springs would be more likely to search for Mountain bike tyres. This led to conversions going up between 3 and 4%

Introduction of Knowledge Graphs with CTAs

On high volume/ ow intent keywords where it is harder to establish what a user wants, much like Google there is an opportunity to implement knowledge graph panels which may drive the user towards informational or even conversion led pages.

Some key takeaways to improve onsite search were

We would suggest checking out these slides for more inspiration if your site search function is used frequently.

The second session of the day we attended meeting room 1 for something a little different, the topic being personal development.

A talk full of her personal failures which we thought was honest, transparent and brave to address in front of an audience.

Some key takeaways were:

And an action plan for success:

Steve Hammer - Keeping Your Wits While Working in Digital Marketing

He spoke about the personal issues he encountered after achieving success with his agency.

Again, a brave and honest talk on his own battles:

Stating that a lot of people have Impostor syndrome such as Neil Armstrong, Einstein.

The risk of depression is increased by spending more than an hour on social media by around 2.7x .

The risk of depression has a 2.5x increased chance if you are an entrepreneur.

The above 2 stats combined equate to a significantly higher risk of depression if you are an entrepreneur who works in digital.

Untreated depression is 10% risk of suicide.

10th leading cause in US.

And it’s important to remember everything on social media is almost always marketing.

Steve has also launched a space for people to share their stories and seek support which we think it is a great idea. It’s called ‘Always tomorrow’ mental health support for SEM and SEO pros and you can find it here https://alwaystomorrow.org/

After lunch as we were on our way to auditorium 1, we bumped into one of the exhibitors - SEOMonitor who had some exciting news with the launch of their new app ‘signals - a data scientist disguised as an app’. Signals is an interesting concept for SEOs because of its format being available in an app, anyway they gave us a SmartScreen to have a try and we have to say it is really quite impressive…

Keyword monitoring tools can be quite busy to say the least as they have so many useful features. What we like about this app is it lifts the useful information to a dashboard screen. So, you know what is going on with your clients on the go, can give out success stories and use to start conversations with client/potential prospects. See screenshot below: 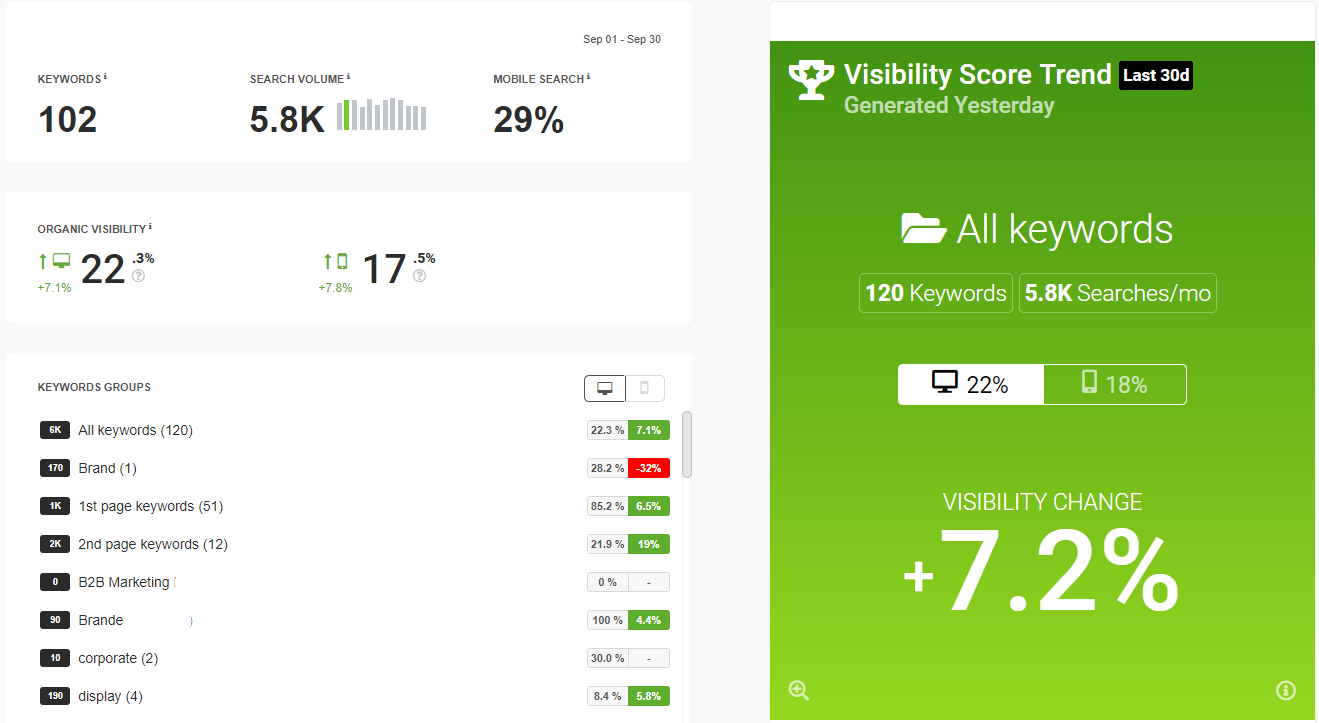 Check it out here: https://www.seomonitor.com/signals/

Hannah Thorpe (who is an excellent public speaker) took to the main stage to discuss SEO without traffic https://www.slideshare.net/Foundonline/brighton-seo-seowithouttraffic

She touched on some useful topics across the landscape of search, kicking off by stating that she thinks ‘Brand is a ranking factor’

And then covered the following:

Izzi’s presentation brought even more science on how to appear in featured snippets. She showcased a number of examples where she had chased and optimised for ranking ‘0’ and the benefits that it could provide for brands.

Identifying the right queries through Google search console in analytics.

Assessing intent highlighting that informational/transactional queries are ‘snippet’ gold as they are more likely to drive business.

Then she went onto give very granular examples of optimisation within types of answers and how you can provide the perfect content on your site for position 0:

Prepositions & comparisons can be optimised with lists which feature clear headers.

Comparisons and data can be best formatted in simple HTML tables. 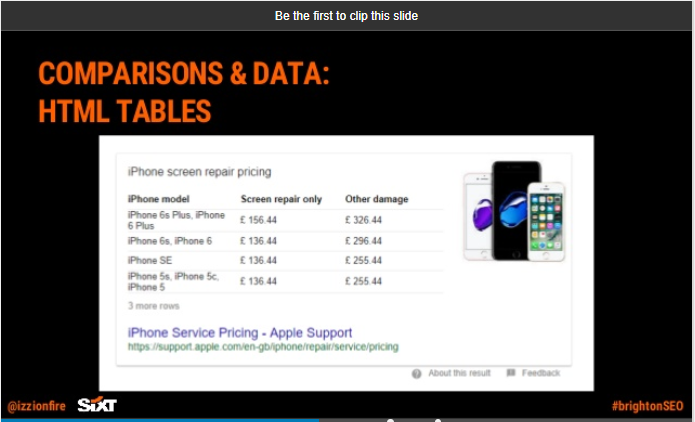 Finding out which brands rank 2nd and 3rd and so on for featured snippets by applying negative search operator.

Patrick gave some great insight into the work he has been doing and real-life examples of technical fixes and the results he had achieved through them.

The first example included a client who had an index bloat problem which he had fixed resulting in traffic quadrupling.

The second was a big cannibalisation issue on products which led to a brand competing against themselves all too often in the SERPs.

Patrick also highlighted that sometimes as a consultant/SEO you can't always implement the absolute best fix due to restrictions but you can still get round this via other solutions.

We had to mention this talk as it was simply hilarious. If Dom ever wanted a change of career we are sure he could go into stand up.

He built the littlewardenapp on a cruise ship? If we remember correctly. And didn’t have a solid/no business plan in place. So, when he finally got around to marketing the product he set about trying to get value through Fiverr. The trials and tribulations of this can be found on his blog and are well worth a read. We’ve just read on Twitter that he will not be publishing slides but if the talk is ever videoed we suggest watching it. N.B. The talk did actually give a serious insight into his business identifying 3 key principles that him and his team focus on.

As engaging as ever, Rand firstly congratulated Kelvin on what he had achieved with the event stating ‘he should be really proud of himself’ a sentiment we echo.

His talk was laced with data on the current landscape of search and clicks and went as far as challenging Google to say we might be seeing the end game of Google creeping in.

Overall takeaways from the talk were:

There is no better time to invest in SEO and get ahead of your competitors in the channel.

Even if Google reduced click through to websites to the levels of 2 years ago organic is still probably the best channel for acquisition.

See below for the list of slides from all the talks that have published:

Rand Fishkin The Future of SEO is on The SERP